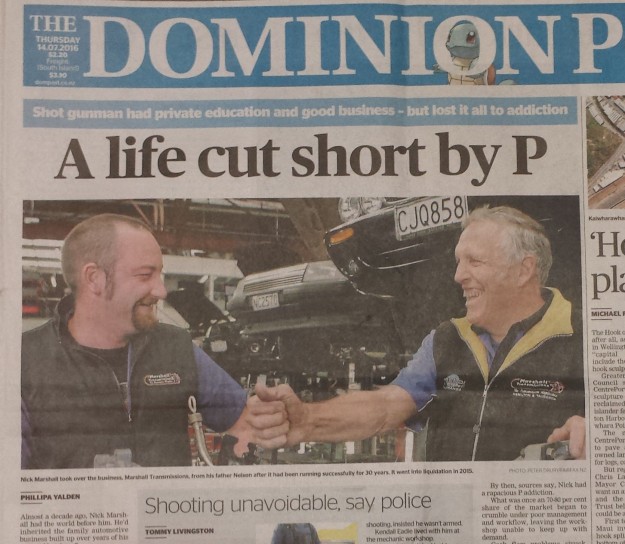 My day got off to a bad start when I fetched today’s Dominion Post from the end of my mum’s driveway and read the headline. (See above. You can click the image to read the whole thing.) Three blatant lies in large print is excessive even for the Dominion Post.

A life cut short by P

FALSE. A life cut short by an unconfirmed number of police bullets.

FALSE. He wasn’t a gunman. According to his girlfriend, who was present, he was unarmed. And, while he may (or may not) have lost the family business to an illegal drug habit, he lost his life to the War on Drugs.

FALSE. There was no need for the police to break into a private residence unannounced and shoot a man dead just as he was about to sit down to have dinner with his girlfriend.

But Marshall’s girlfriend, who was there at the time of the shooting, insisted he wasn’t armed.

Kendall Eadie lived with him at the mechanic workshop.

She said the pair had just been about to have dinner when police stormed into the residence and immediately fired three shots at Marshall.

“The police executed a warrant on my place and murdered my boyfriend,” she said.

Three vicious falsehoods, and then my day got worse. While my mum read the paper, I went online to read the article. I searched for the headline, “A life cut short by P” to find it. But this is all that Google returned. 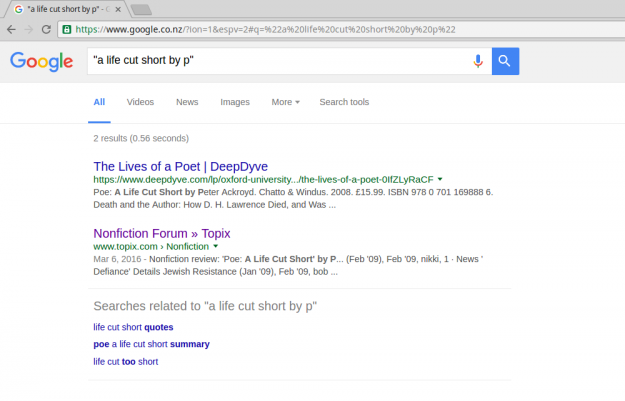 Two links to a review of a biography of Edgar Allan Poe. When I did find the online version on Fairfax Media’s stuff website, the main headline now read

and I became agitated. So much so that my long-suffering mother, who is well accustomed to her visiting son’s political rants, had to tell me to calm down. This before I’d had my morning meth or even a cup of coffee. 🙁

Why was I agitated? Because I realised immediately that readers of the print version, who (on average) are an older demographic who vote more, would not read the more truthful headline presented to readers of the online version, who (on average) are a younger demographic who vote less. The demonisation of methamphetamine continues apace deviously as the police ramp up their ongoing persecution of drug addicts (essentially all of whom are addicts due to unresolved psychological trauma—yes, drug addiction is a mental illness) this time by way of an extrajudicial killing. FTP and the MSM they rode in on!

I’ve said it before, and I’ll say it again, loud and clear. LEGALISE P. Or, at the very least, medicalise it. Make methamphetamine available on prescription. This is not in any way, shape or form a radical or irresponsible proposal. It’s simple common sense and compassion. It’s a no-brainer, and if it seems otherwise to you it’s because, sadly, you’ve been brainwashed. Actually, let’s be frank. If you think methamphetamine is inherently dangerous (Jim Anderton once called it “pure evil”) then you’ve been duped. Methamphetamine is safe enough to prescribe to children.

Desoxyn is a central nervous system stimulant prescription medicine. It is used for the treatment of Attention-Deficit Hyperactivity Disorder (ADHD). Desoxyn may help increase attention and decrease impulsiveness and hyperactivity in patients with ADHD.

Please realise that methamphetamine is only a methyl group (“meth”) different from amphetamine. Chemically speaking, methamphetamine and amphetamine are closely related, and in terms of subjective effects, even veteran speed freaks find it difficult to tell the two apart. Please know that amphetamine and its chemical cousin methylphenidate are routinely prescribed in New Zealand for the treatment of children and adults with attention deficit hyperactivity disorder (ADHD).

Meta-analyses and systematic reviews of magnetic resonance imaging studies suggest that long-term treatment with ADHD stimulants (specifically, amphetamine and methylphenidate) decreases abnormalities in brain structure and function found in subjects with ADHD. Moreover, reviews of clinical stimulant research have established the safety and effectiveness of the long-term use of ADHD stimulants for individuals with ADHD.

Pretty much all the (wildly overstated) harm associated with methamphetamine use is due to improper dosage (yes, you can have too much of a good thing), improper route of administration (don’t snort it or smoke it), and (mainly) its illegality. What are the odds that the late Nick Marshall had undiagnosed ADHD and his methamphetamine use was as much self-medication as addiction? Suppose that he’d been able to see his doctor and get a prescription for P. Fully funded by Pharmac, he’d burn through $10 a month instead of frittering away the multi-million dollar family fortune in a few short years. (If, indeed, that’s what he did. I shouldn’t be making such an assumption. People with ADHD make notoriously bad business managers.) With the help of his doctor, he could reduce his methamphetamine use and wean himself onto the perhaps more forgiving amphetamine or the even more innocuous drug methylphenidate. And today Nick Marshall would still be alive and successfully managing Marshall Transmissions.

In conclusion, the War on Drugs is the Holocaust of our times, the editors at the Dominion Post are propagandist scumbags, and the blue-uniformed thugs are murderous Sturmabteilung. 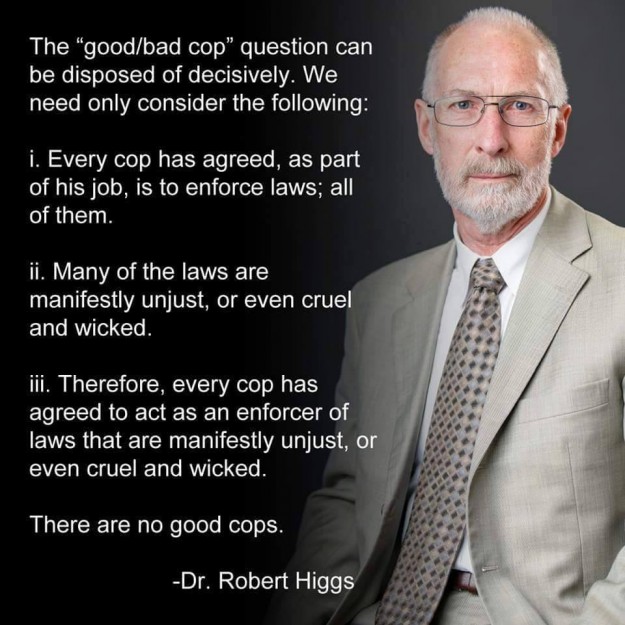 But the fruit of the Spirit is love, joy, peace, forbearance, kindness, goodness, faithfulness, gentleness and self-control. Against such things there is no law. (NIV)

2 thoughts on “A life cut short by Police”