[WARNING: This blog post contains lots of very strong language and is practically guaranteed to give offence to weak-minded prudes. Please proceed at your own risk.] 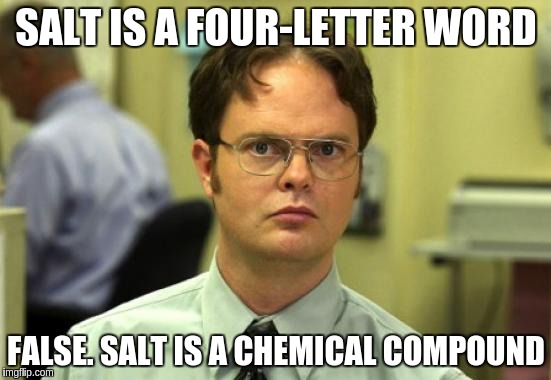 The use–mention distinction is a foundational concept of (Western analytic) philosophy. To fail to recognise the distinction is, at best, to invite disaster.

In this post I want to say a few words about four-letter words (e.g., ‘fuck‘ and ‘shit‘) and their cognates (e.g. ‘fucking shit‘) and briefly discuss whether (and in what contexts) Christians ought or ought not to be using such vulgarities and profanities.

And it struck me that the perfect way to make the main point I want to make is to recycle the metaphor that Jesus uses in Matthew 5:13 right after the Beatitudes in the Sermon on the Mount. Jesus says to his followers

You are the salt of the earth. But if the salt loses its saltiness, how can it be made salty again? It is no longer good for anything, except to be thrown out and trampled underfoot. (NIV)

George Carlin aptly refers to the words I’m talking about as “just words which we’ve decided not to use all the time.” And “that’s about the only thing you can say about them for sure.” Carlin’s bang on the money! Because, if we used the words all the time, they’d lose their “saltiness”! They’d no longer be effective cuss words and they’d no longer be good for anything more than just plain old communication. Which would be a dingleberry of a disappointment.

(Or would it? If we no longer had an inventory of “reserved” words with which to insult others effectively, we’d have to relearn the art of the insult. And our prose would begin to be colourful like Bill Shakespeare‘s or Martin Luther‘s prose is colourful. And actually that would be fucking awesome!)

Say what you mean and mean what you say. Is probably the one blog post of mine I regularly link to. It explains how (according to me, but I’m not wrong) words acquire their meanings. The meaning of a word (any word) is determined by the conventions that govern its use. And those conventions can and do vary between different communities of language users. Amongst the kind of people I usually hang out with, the words ‘fuck’ and ‘shit’ are used fairly indiscriminately. They’ve pretty much lost their saltiness in those contexts. (But I use those words extremely judiciously, if at all, if I’m having dinner with, say, my mum or any of her older friends.) Whereas both I and my peers still tend to hold back on using the terms ‘cunt’ and ‘motherfucker’. Those two words remain mostly reserved for when we need convenient terms to refer to truly despicable people, such as Peter Dunne.

Here’s a picture taken Wednesday evening of me (on the right) and a couple of good cunts. 🙂 🙂 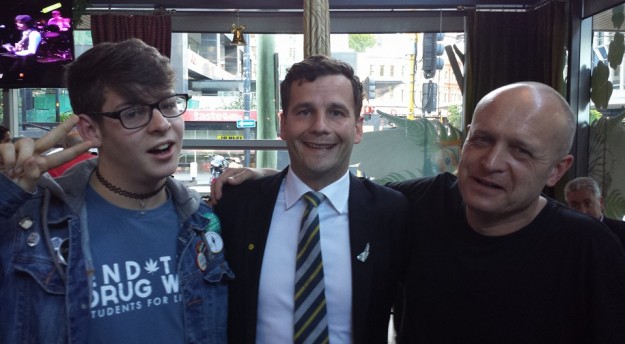 Now to the question, ought Christians to be using the sort of language I’ve been using here? The answer is simple common sense, really. It depends on the context and the occasion and the company. None of the cuss words above is at all appropriate during a church service, for example. (But you may say “piss” if you’re reading from the KJV.) Such terms should be used sparingly, if at all, in polite company. Because they’re impolite. But in impolite company (such as on my Facebook page) they’re not impolite. Here’s what the Apostle Paul says

Do not let any unwholesome talk come out of your mouths, but only what is helpful for building others up according to their needs, that it may benefit those who listen. (NIV)

Nor should there be obscenity, foolish talk or coarse joking, which are out of place, but rather thanksgiving. (NIV)

It’s contextual, you see. Don’t go calling someone a good cunt if it’s “out of place” to do so. But do go calling them that if it’s “helpful for building them up according to their needs.”

I’ll finish by noting that there’s a big tension between being a good cunt and being a formidable motherfucker. If you succeed at being both simultaneously then you’re practically a saint.

One thought on “Salt is a four-letter word”