Last week’s standoff between Southern Nevada rancher Cliven Bundy and the Bureau of Land Management “is not over,” Senate Majority Leader Harry Reid told a gathering of students, professors and political candidates Monday at the University of Nevada, Reno.>>>Here<<< “We can’t have an American people that violate the law and then just walk away from it,” he said, reiterating the fact that “it’s not over.” Read more >>>Here<<< Yet is The Law really on Reid's side .... or the Bundy's? If what has been said about Reids vested interest in pushing the Ranchers out of Nevada is true, then it may surprise many sheeple to hear that the Armed Ranchers and Militia *acted Lawfully* in taking up arms and resisting the unjust and tyrannical demands of the Bureau of Land Management, and getting the illegally confiscated Bundy cattle back. They were claiming their Second amendment Rights... which trumps any and all legislations and dictates which would have the Bundy's submit to the will of the BLM. 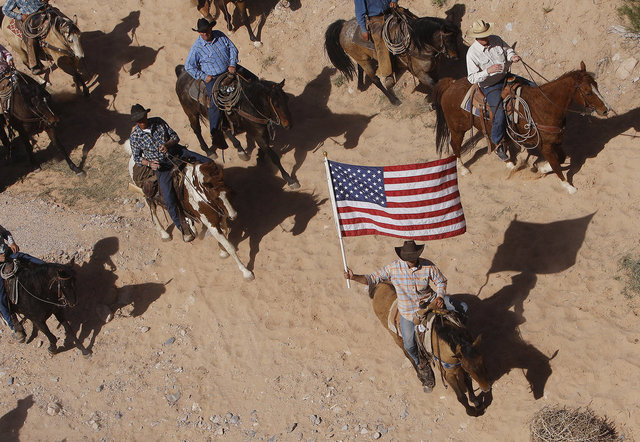 This sort of situation is exactly why the Founding Fathers enshrined the second amendment.
It is the Lawful right to Bear arms in self defence against corrupt and tyrannical government.

Follow the link below…
NAPOLITANO: The right to shoot tyrants, not deer
The Second Amendment is the guarantee of freedom 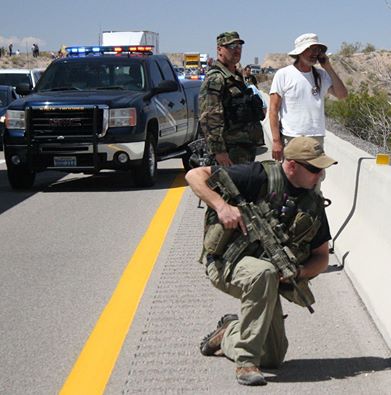 Milita sniper covers the Bundy cowboys as they confront the BLM and demand they Stand down and release the cattle.

Of course this sort of armed resistance is going to piss off the Bastards in Power Big time, and there is a very real threat that everyone involved in the resistance could be murdered by the state or imprisoned… unless the People of America Rally and stand behind these Brave freedom fighters…
Their Fate will be determined by whether or not the Tyrannical powers *Fear the wrath of the People*… or instead convince themselves that they can crush this ‘rebellion’ with little fear of an escalation into full blown Revolution.

Reid’s comments clearly indicate this crisis is not over by a long shot and there is every reason to Fear ‘Waco type’ repercussions.

It is therefore imperative that Patriots and militia about the US step up now and voice their solidarity and fraternity with the Bundy resistance…. and that Bloggers/ Social network Fans around the Globe make it clear that we are all watching… and in the know…. so that the Power mongers in Washington appreciate they cant hide the truth.

May The Good Lord Be with the Righteous Defenders of Liberty and Justice.
Tim Wikiriwhi
Christian Libertarian
New Zealand.

Update: 22-4-14.
As predicted the Bundy’s, and all their supporters, Vets, and Patriots have been labelled “DOMESTIC TERRORISTS” By Senator Reed!

8 thoughts on “Bundy Cowboys and Militia Stand on the highest legal ground… Why the 2nd Amendment was enshrined.”