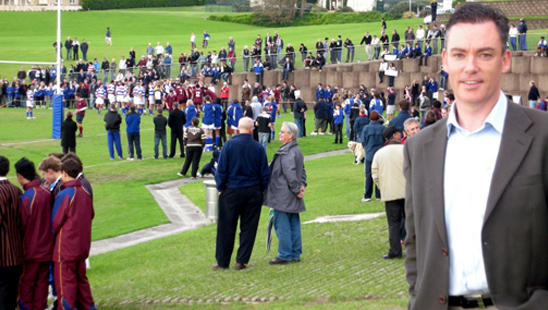 Rugby is a game played by most boys in New Zealand in their childhood, though some don’t want to play it at all. A significant section of the community have always preferred to play a different sport, like soccer.

But Rugby gets all the status in New Zealand, commanding all the respect. So much so that those who play soccer are often made to feel like second-class citizens. They lack the mana of those who play the nation’s revered game.

To end this discrimination we have decided to redefine Rugby to include any sport involving two teams with a ball. As long as you love your team-ball sport you are a rugby player and should be recognised as such in law. Some of our opponents try scare mongering by saying: “well then hockey will end up being called rugby” – but that is not what we are saying at all. This bill is only about soccer players having the right to be considered rugby players like all other rugby players. Hockey uses a stick and no one is saying that should be called rugby.

This isn’t about whether you prefer soccer or rugby. It is a fundamental matter of justice and equality. Why should those soccer players who play every week with a ball against another team not have the equal opportunity and right to be recognised in the street as rugby players? Why are they denied the title and privileges on the grounds that they play differently? Shouldn’t all boys in New Zealand have the same rights regardless of their sporting preference? Why discriminate against boys for the way they choose to play their ball-sport? Aren’t we a country that prizes freedom of choice? In New Zealand you can be a rugby player if you are a boy or a girl, an Asian, Indian, Maori or European…. but apparently not if you are a soccer player.

We should remember that rugby itself has historically undergone many changes. Once upon a time, there were only four points for a try and now there are five. There are eight in the scrum today instead of six in earlier times. Before you had to jump by yourself in the lineout and now you can be lifted. So the Rugby Union is happy to adjust and refine the definition of rugby throughout the ages– but for some reason they stop at soccer. That old boys’ club want to control the definition themselves because underneath, they really regard soccer players as wusses. But look at how they handled their own finances in Otago. And let’s never forget that once upon a time there were white Rugby Union teams in South Africa who refused to let black people be rugby players alongside them. Do we want to perpetuate the same kind of discrimination by denying that soccer is an equally legitimate form of rugby?

New Zealand has always prided itself on a clear separation between sport and politics, and in the 21st century our political system needs to be free from all forms of discrimination. We led the world in giving women the vote. Yet there are still those who are happy to bar the door to those who play sport differently. There is no point in having a referendum on the issue because of course most rugby-playing New Zealanders will want to defend their privileges and guard the status quo.

Some say that we have already achieved equality, when the national soccer team finally got called the “All Whites”. That was a step in the right direction, but it didn’t go far enough. Soccer players need the same access to the “All Black” name and jersey. It’s not good enough to call them “All Whites” when overseas everyone’s heard of the All Blacks. No one talks about the All Whites. It is time to embrace the right of all ball-playing New Zealanders to be regarded as rugby players, regardless of the shape of the ball they use and how they choose to handle it.